A collection of 70 top pieces of the Grafische Sammlung from the Landesgalerie Linz, in Austria, entitled ‘Lyrical Lines’ (Lyrische Lijnen) will be exhibited in the Drents Museum from June 29th until September 22nd. Pieces by Klimt, Kokoschka, Schiele, Kubin, Brosch, Egger-Lienz, Faistauer and Wach will be displayed on the upper floor of our section Art 1885-1935. The exhibition ‘Lyrical Lines’ provides a rich image of the extremely colourful and versatile Austrian paper art in the first two decades after 1900.

With their sensitive and elegant lines, artists like Schiele, Klimt and Kokoschka cast us back to the early nineteen-hundreds, in which a great variety of new ideas and fresh impulses proceeded each other very rapidly. In 1897, a group of artists headed by Gustav Klimt, separated themselves from the mainstream artistic movement of that time. They called themselves the Secession, which means the Separation. Their goal was to renew. Although these artists didn’t have a set stylistic programme, a new style was born in which realistic and decorative elements fused and intertwined. Influenced by the Symbolist movement, these artists focussed on dreams and fantasy, and they set out to portray man’s longing for paradisiacal happiness, often in the shape of angelic women.

Ten years after the Secession, the next generation came into action: expressionists like Schiele and Kokoschka left the Secessional paradise and stepped back into reality. Their focus shifted towards the tormented, searching individual with all his phobias and frustrations. The inner self and the subconscious increasingly made their way into the images.

Klimt, Schiele, Kokoschka and their contemporaries did not work in isolation. They were surrounded by writers like Arthur Schnitzler, composers like Gustav Mahler and Richard Strauss and psychiatric founder Sigmund Frued. Especially Freud and Schnitzler had a strong focus on sexuality as a driving force for human behaviour. Seductive women play an important role in their work.

The selection on display in the Drentsch Museum envelops various themes: nudes and figure studies, portraits, landscapes, animals and war. The functions of the exhibited works vary from studies for paintings, sketches of postures and types, to autonomous drawings, watercolours and illustrations. The variety of techniques is equally large: we show gouaches, drawings, lithographs, watercolours and etchings. 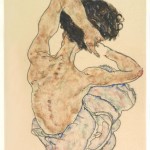 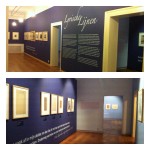 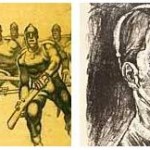