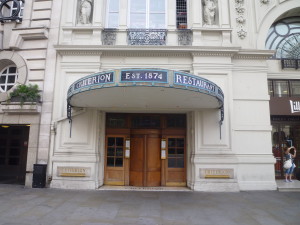 There are many iconic buildings throughout London; but, aside from their aesthetic appeal, how much do people really know about the history of these structures? For example, people see the Criterion Restaurant and Theatre as the location where food is served and plays and musicals are performed (criterionrestaurant.com).  Yes, these features are true, but why is it such a famous location? Who built it? Who designed its artistic features? To answer these questions, one must first travel to Australia in the mid 1800s. At this time there was a gold rush occurring in Australia, and many people from England joined it.  One of these Englishmen was Felix William Spiers. After arriving in Australia, Spiers met a fellow Englishman named Christopher Pond. The two became fast friends and decided to open a restaurant for the increasing number of gold miners. The pair was a great success. Soon they were expanding into new buildings and sponsoring people to come to Australia for lectures and sports. Through sponsorship they brought many “firsts” to Australia, such as the first air balloon flight. Probably the most well known “first” was their bringing the first all-English cricket team to Australia, which also was the first commercial sponsorship of cricket (Spiers.net).

Although Spiers and Pond were very successful in Australia, they decided to return to England and expand their business into London. As they had noticed that there were no restaurants that catered to gold miners, the two men recognized that there were no restaurants near the railway stations for passengers. As a result, Spiers and Pond went about securing rights to build restaurants near these stations. By coincidence, the White Bear Inn outside of the Piccadilly Circus station was recently demolished, making it available for Spiers and Pond to build their restaurant (Spiers.net). The men chose Thomas Verity, a fellow of the Royal Institute of British Architects, to design the new building. Spiers and Pond wanted the building to contain a restaurant, dining rooms, ballroom, and concert hall. Construction began, but soon the men decided that, rather than a concert hall, a theatre should be built (victorianweb.org). The Criterion Restaurant and Theatre were opened 21 March, 1874, and were an instant success. Naturally, this was partially due to the popularity of the showing of H.J. Byron’s An American Lady and Topseyturveydom by W.S. Gilbert. The notoriety of the Criterion increased after Charles Wyndham became manager in 1875. Under Wyndham’s direction the theatre became one of the leading comedy venues in London (criterion-theatre.co.uk). 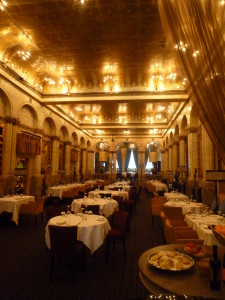 The Criterion Restauant and Theatre have undergone several renovations over the years. First, in 1883 the building was fitted with electricity and alterations were made to secure the safety of those dining and attending the theatre. The second, and most noticeable changes, were completed in 1903. It was decided that the Criterion required some modernisation. The task of structural design fell to the contractor William Webster. Additional features such as the wall decorations were completed by Simpson and Sons, specialist tiling contractors (wbsimpsonsons.co.uk). Once renovations were completed, the Criterion Restaurant and Theatre reflected the modern Art Nouveau style of architecture and design.

With Art Nouveau one must look at the building as “a total work of art” (Greenhalgh 2000). Each design or feature of the interior is supposed to relate to the other features. One can look at a particular design, but it is only by looking at everything together that one receives a complete picture. Another characteristic of Art Nouveau is the incorporation of nature (Escritt 2000). This can be seen in the both the exterior and interior design of the Criterion Restaurant. On either side of the “Criterion Restaurant” sign are swirling designs that mimic the movement of vines. The ceiling of the interior is decorated in floral patterns, as are the tops of the columns flanking the sides of the room. One design quality that is evident in the restaurant is the influence of styles from outside of Europe(Greenhalgh 2000). It was very common for designers to incorporate designs from Japan, China, Central Africa, and Islamic nations. In the Criterion one can feel a sense of Egyptian influence through the geometric shapes that decorate the fireplace and trim along the top of the walls. However, the ceiling reflects more of the designs from the Islamic nations, which becomes evident when directly comparing the ceiling to Islamic floral motifs. 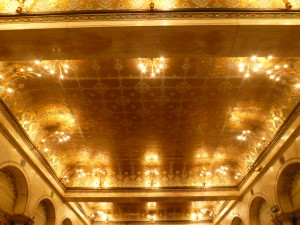 There are two more points worth mentioning regarding the Art Nouveau style reflected in the Criterion Restaurant. First, Art Nouveau is meant to be deceptively simplistic (Greenhalgh 2000). When stepping into the restaurant, one notices the beautiful patterns, but it may not be blatantly clear that the designs are actually a complex combination of styles and ideas. The final point to address is some of the ideas associated with Art Nouveau. Art Nouveau was meant to incorporate both “modernity and tradition, anxiety and confidence, decadence and progress” (Escritt 2000). These designs grew out of a time of pleasure-seeking. The movement relied upon people consuming luxury goods (Greenhalgh 200). Out of all the Art Nouveau buildings in England, the Criterion Restaurant might be the best example of this concept of indulgence and luxury. When one steps into the buildings, immediately the eyes are drawn toward the ceiling. As mentioned, the ceiling is displays a beautiful floral design, but another feature is that this design is created using gold. The ceiling is worth millions, making it the epitome of luxury. Again the style may appear simple, but in this case there certainly is more to the design than people realize.

With such extravagant surroundings it is not surprising that the Criterion Restaurant has been the host to many noteworthy individuals. One of the most famous stories, albeit fictional, is that the Criterion is the place where Sherlock Holmes first met Dr. Watson. However, it was a real life dining location of Sir Arthur Conan Doyle who imagined the scene occurring at the Criterion Long Bar. Other nonfictional diners were the first suffragettes, Winston Churchill, David Lloyd George, Edgar Wallace, Sir Hugh Walpole, G.K Chesterton, Bertrand Russell, and H.G. Wells acting as chairman for the Royal College of Science’s first annual dinner. While the Criterion has been the restaurant of choice in the past, it is still a popular venue today. Not only do locals and visitors reserve tables for an unforgettable dining experience, but it is still a favourite location for politicians, members of the Royal family, and stars of the stage and screen. Most recently it has been used for scenes in the movies “Batman: The Dark Knight” and “A Good Year” (criterionrestaurant.com). The Criterion has a rich history, but it also has a rich present. It is well worth visiting the Criterion Restaurant to view its beautiful Art Nouveau architecture and designs, recall the historic moments that took place inside its walls, and to think about the modern celebrities who have dined at its tables.