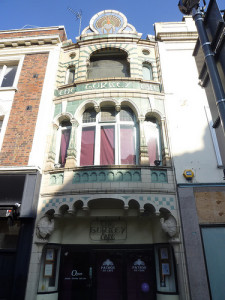 In an age where old buildings are torn down to make way for new construction, it is nice to hear of a location that has remained relatively intact for over a century. In the early 19th century, the land around what is now the Turkey Cafe at 24 Granby Street was once the home of inns, blacksmiths, stables, pigsties, and homes. One can only imagine the mixture of odours and noise. While families did work and live in the area, morality and honesty were not always present. This is evident by the Falcon Inn losing its license in 1873 for being a house for prostitutes. However, situations improved as ownership of the land changed and new stores were established. In 1877, James Wesley, a grocer and confectioner, bought the land next to what used to be the Falcon Inn. He owned the land until 1899, when he sold 22 Granby Street to Arthur Wakerley. Wakerley already had his first tenant in line, John Winn. John Winn was a restaurateur and already owned the Oriental Cafe in Leicester. The offices of Wakerley’s architectural practice were above Winn’s Oriental Cafe, making it easy to negotiate a deal regarding the construction and occupancy of a new cafe on Granby Street. Wakerley approached the Royal Doulton Company for help constructing his design for the new “Turkey Cafe” (Farquhar 1987). 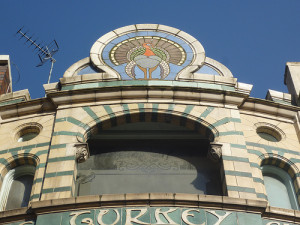 The style of the Turkey Cafe reflected what was popular at that time, which was the new trend of art nouveau. The building created a sense of stability by visually implying a pyramid structure. This was done by having seven arches on the ground floor and then decreasing the number of arches on each level. The pyramid is completed with a single turkey located at the top of the building. The building was coloured blue, green, and buff, which allowed any onlooker to fully appreciate the shapes and curves of the building’s designs (Farquhar 1987). The facade was constructed using tiles, hollow blocks, and a type of terra cotta called carraraware.  The Doultons actually developed carraware in 1888, which is a matt-glazed stone-ware.  The carraware tiles of this frontage were handmade by William Neatby, a ceramic artist who worked for the Doultons (Taylor 1997). In addition these features, art nouveau can be found in the decorations etched into the front window, as well as the red and green art nouveau designs of the rear tea room windows (Farquhar 1987).

The Turkey Cafe was opened in September 1901 and was renumbered 24 Granby Street. As a tea room, the cafe was popular with women. Not only was it a respectable venue for gathering, but it provided a convenient meeting place to discuss the progress of women’s rights (Taylor 1997). However, the cafe was not designed with only women in mind. Located in the back of the cafe was the Smoke Room. This room with its dark interior provided a place for men to gather and converse as well.  The popularity of the cafe rose so high that in 1911 Winn expanded into the building next door, which used to be Wheeler Kendall’s “Umbrella Manufacturer and Can Stick Merchant.” This change allowed Winn to expand the restaurant and storage space, and add a billiard room (Farquhar 1987).

Further renovations were made in 1927 when Winn decided to modernise the entrance, making the front appear more art deco than art nouveau. Wakerley allowed for the changes, as long as Winn restored the shop to its original appearance once the lease was done. Unfortunately, when Winn’s family sold the Turkey Cafe to the Brucciani Bakers Ltd. in 1963, no restoration actually occurred.  Under the Brucciani family, the Turkey cafe became a coffee and ice-cream shop. The reputation of the cafe as a location for woman to gather continued, and in 1966 the cafe had a “Ladies Only” room. Of course, once the Sex Discrimination Act was passed in 1974, they could no longer prohibit men from entering. In 1968, the cafe was once again renovated. The result was a mixture of old and new. The original interior tiled walls were panelled over, a tiled mural of a turkey was added, and smaller windows were inserted (Farquhar 1987).

The Turkey Cafe underwent yet another renovation process when Rayner Opticians Ltd. purchased the property in 1982. The interior was altered greatly to accommodate the new business that it would house, and curved windows were added to the above stories. However, the etched glass windows on the ground floor and the front arch were kept and restored to their original condition (Farquhar 1987). Rayners tracked down the Hathernware Ceramics Ltd. of Loughborough who was the only firm experienced in using the terra cotta material needed for restoration (Midlands Heritage 2011). The opticians were also fortunate enough to have the original architectural drawings and a 1910 photograph, which architects Sawday and Moffat had in their archives. Rayners then commissioned Deardon Briggs Designs Ltd. to follow these plans for the restoration process and creation of reproductions. In the end, the restoration of the exterior cost over £30,000, with the Leicester City Council contributing £5,000 (Farquhar 1987).

For two decades the building served as an optician’s office, but in 2004 the building was returned to its original purpose. The current owners of the Turkey Cafe do run it as a cafe (Midlands Heritage 2011). The building has also been listed as a grade two building for its art nouveau style architecture, making it clear that the building is of architectural and historic special interest (Taylor 1997). To the people of Leicester, the building certainly is worth preserving and does have an interesting history. The building has served as a cafe, restaurant, meeting place, ice-cream parlour, and unexpectedly an office for opticians. While numerous buildings were destroyed during and after the World Wars, including all of Winn’s other cafes, the Turkey Cafe has remained (Taylor 1997). Now, the building has come full circle, standing restored in its original appearance and serving as a cafe. It certainly would be a perfect location for someone to sit back, enjoy a cup of coffee, and be transported back to an earlier time.