Each Dutch child is familiar with the phrase ‘Melk is goed voor elk’ (‘Milk is good for everyone’). This phrase is in keeping with the intrinsic Dutch rural common sense of ‘acting normal is weird enough’. In art, this is expressed in austerity and rationality. A characteristic of the typically Dutch form of Art Nouveau, Nieuwe Kunst, is its lack of embellishments. It is firmly grounded in functionality.  This continues in contemporary ‘Dutch Design’. 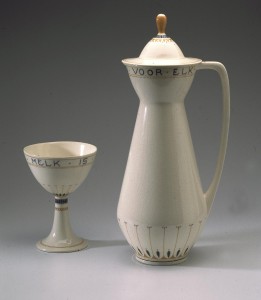 A good example of Nieuwe Kunst is this milk service by Chris van der Hoef (1875-1933), part of the collection of objects being three-dimensionally scanned for Partage Plus. The decorations on the earthenware are sober, using stylized, mostly completely abstract forms. It is a textbook example of what is called the ‘constructive movement’ within the Nieuwe Kunst. For designers such as Van der Hoef, choice of material and functional purpose of the product were their first considerations. Decorations are of subsidiary importance. This simplicity and rectilinearity are contrastive to the ‘decorative movement’ which is more internationally oriented and which often takes the decoration as starting point for the construction. 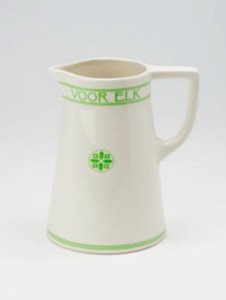 The 3D scanning for Partage Plus is special in that the objects are made digitally spacial, which allows us to approach the designer’s original idea. At the same time the functional purpose of the object is emphasized. If it were possible to check the bottom of the object, several marks would be found: the designer’s mark, the executor’s mark and often even the seller’s mark. This cooperation is characteristic of the ideals of Art Nouveau, which gave new appreciation to workmanship.

Van der Hoef designed several milk services for various factories, of which these are two examples: the form of the first design is sharper than the form of the second, which looks more luxurious. Services designed by Van der Hoef were often aimed for a wider audience. His ‘cube’ service is well-known; in this design, the decoration has been reduced to a few basic cubes. Van der Hoef’s work was internationally successful and was considered ‘typically Dutch’.

In addition to this milk service, some 130 objects from the collection Art 1885-1935 will be 3D scanned this week, among them some fine examples of both the constructive and the decorative movements within the Nieuwe Kunst. In addition to earthenware, furniture, clocks, textiles and sculptures will be scanned. Together, these images will give a representative image of the Nieuwe Kunst around 1900. 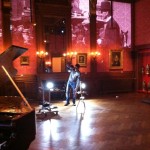 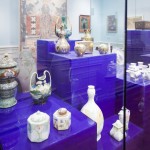